IPL 2019 begins from March 23,2019, and the first match will be played between Chennai Super Kings and Royal Challengers Bangalore. CSK captain MS Dhoni was  the winner last year The Match is between CSK and  RCB or we can say  It's Dhoni vs Kohli  . It would be exciting to watch them perform on day.

MS Dhoni the former captain hand is an achiever.  His hand is a perfect combination of leader and achiever. The individual  short fingers, the broad wide palm, the perfect Head and Heart Lines, the long thumb, the strong Mount of Venus, and well developed Upper Mars all indicate action , courage high standard talent.  He is a man with tremendous mental and physical skills who knows how  to take his talent to the highest level.

What makes him stubborn He is a perfectionist and very good leader and  but stubborn. His short fingers do make him Obsessive.  Strong Mars and long Sun finger is making him loud . He sets standards for himself and for others, which can become a pain for others.

He strongly desires fame and wants to be known for his skill and talent especially due to his strong Sun finger .
A media savy Venus is giving him inclination towards media but moodiness as well Moon   gives rise to feelings of jealousy of those more talented than him because he does have feelings of insecurity.

Dhoni a good planner  Dhoni is a fairly good planner [ Square tip of  Satrun Finger ] It is his creativity and imagination which give him a strong intuitive feel for the game and help him make the right decisions (Mount of Moon and Fingers). He is also shrewd and understands people (Mercury finger) but he is not a master manipulator or cunning strategist in the true sense of the terms due to Sun Finger .His plus points are that he is serious, focussed (Saturn finger shape), intuitive, understands people, is very talented and can see issues objectively, with his emotions well in control. This helps him make the right decisions (Strong thumb, Hand shape and Headline and Heartline ). His negative points are that he can get too critical of others and is at times insecure and vindictive due to Saturn. 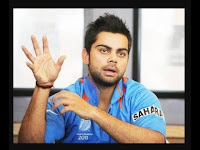 Virat Kohli’s hand with its broad square palm  with short fingers and a good mount of Venus with strong Mars and   Moon.  The bony thumb is adding perfectionitis quality. The Lifeline is looking straight with curving headline and strong heart line  and straight Fate line . All these combinations makes him sporty energetic, creative, talented and hardworking individual and star bats man .

A Winner    The Indian captain, straight Life  line reveals he must have faced lot of insecurity and tough time in his childhood . His straight heart line made him caring loving and warm person but also straight forward and arrogant. The angular head line added creative skills .
Brainy Person  The strongest part according to me is thumb in his hand.  It gives him perfection, focus, self-control determination and management which made him  good batsman   and captain of Indian team.    He is a good human being, the kind of person who commends himself to others. For a sports man planning, courage confidence is very important which came to him because of long Saturn and Sun  Finger . If you see both  are of more or less of same length . Due to long Sun finger Virat became authoritative, famous and a good leader .   He does not hesitate in trying new things and does lot of experiment which can be risky .   The Jupiter finger is neutral and so is mercury . All these fingers are forming an Arch which gives balance  mind. It do reveal that he accepts his mistakes and try to remove them which will always help him to  grow .

His negative point is he is always in hurry which  can give wrong decisions . He needs to stay Calm .
What made him marry film star Anushka
His Venus is very strong  along with long Sun finger which gives inclinations towards media , films and  beauty  .


Written By Nisha Ghai
#MSDONI #Vrat kohli #IPL  #IndianCriket  #RCB #PalmistryAnalysis #CSK #ChennaiSuperking #RoyalchllengersBaglore
Disclaimer –palm reading  on this blog is mostly from the shape of the hands lines  and fingers taken from  photos on the web, which can vary from picture to picture many   lines are not clearly visible in public photos.

Posted by Renowned Indian Palmist Nisha Ghai at 4:16 AM No comments: